With the NFL offseason properly heating up, the complexity of the sport begins to step in to another dimension. Media pundits, hardcore fans, franchise GMs and head coachesbegin to rely on a dizzying set of descriptors to explain to the world what’s going on behind closed doors.

For the casual fan, terms like “franchise tag”, “qualifying offers”, “protected picks” and “transition players” sound sophisticated in conversation (and will win you an approving head-nod  when dropped correctly) but can sometimes lead to crippling embarrassment if used in the wrong context.

Here at Sportstips.com, we’ve got you covered. We understand that sometimes these things need to be spelled out in simple terms, because we’re fans just like you.

In this series of weekly articles over the football offseason, we’ll be exploring the vocabulary of the NFL; the words and phrases you’ve heard all your life but never quite taken the time to properly understand.

This week: the franchise tag

When the New England Patriots “declined to use their franchise tag” on defensive lineman Trey Flowers earlier this month, it was a move which divided the Pats’ fandom.

Flowers was (arguably) New England’s best defensive player. He’s amassed 21 sacks over the last 3 seasons (including 5.5 in the playoffs), and had 57 tackles and 3 forced fumbles in the 2018-19 season playing as an edge rusher. Pro Football Focus ranks him as the sixth-best defensive end in the league.

New England, by not franchise-tagging Flowers, allowed him to become a free agent and on Monday March 11 Flowers signed a deal with the Detroit Lions worth $90 million over five years.

How did this happen? Why did the Superbowl-winning, perennially-successful, shrewder-than-most New England Patriots allow a player of Flowers’ calibre to freely walk away?

Let’s use the example of Flowers to walk through the when, where, why and how of franchise tags.

The essence of franchise tagging is that it allows teams to contractually bind players who would otherwise become un-contracted, unrestricted free agents.

In May 2015, Flowers signed a four-year $2.838 million rookie contract with New England.  That contract was due to expire in May of this year. As we’ve discussed previously (specifically in relation to the NBA, but applicable to most sports) when a player’s contract expires, and except in certain circumstances, they hit the open market as an unrestricted free agent. This allows them to sign with any team at a salary determined by the market.

Each team in the NFL is given one “franchise tag” to use each season. Franchise tagging halts the contract-expiring process; it prevents the prospective free agent from hitting free-agency and binds them to their current franchise for (at least) another year. Teams are required to choose whether or not to use their franchise tag, and who to use it on, prior to the start of free-agency.

There are two types of franchise tags teams can place on a player; non-exclusive and exclusive.

The player is signed to a one-year contract. The contract salary is whatever the greater amount is out of:

By way of example, for the 2016 season the minimum cost of franchise tagging a quarterback (based on the top 5 average salaries) was $19.953 million. When the Washington Redskins franchise-tagged QB Kirk Cousins in that offseason (for the first of two times) they thus signed him to a one-year contract worth $19.953 million.

Under the non-exclusive tag, the player is allowed to discuss terms with all other teams. The original team retains the right to match any offer. In effect the player becomes a restricted free-agent (see our article from two weeks ago for more information on what that means).

Under an exclusive franchise tag, the player is signed to a one-year contract. The salary for that contract is whatever the greater amount is out of:

The major difference between the two types of tags is that under the terms of the exclusive franchise tag the player is forbidden from negotiating with any other team in the league. It was designed in this way to allow the player and the team to try and come to some agreement as to the player’s future earnings without the distraction of competing offers. Theoretically, it gives small-market teams the opportunity to hold on to and negotiate with homegrown stars for longer than they may get otherwise. 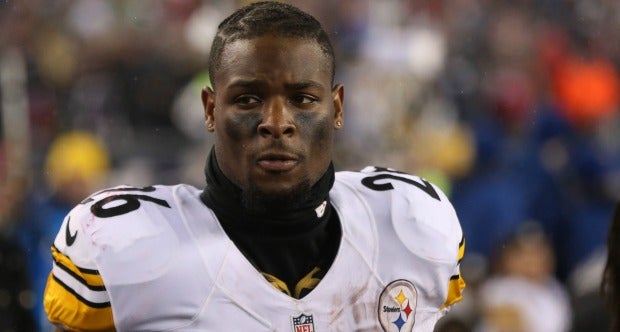 It doesn’t always work this way. In 2017 the Pittsburgh Steelers placed an exclusive franchise tag on running back Le’Veon Bell. They were able to pay him $12.12 million for the 2017 season, despite Bell’s market value in free-agency sitting somewhere around $14-15 million. The two parties could not come to a long-term agreement over that season. The Steelers again franchise-tagged Bell in 2018 (offering to pay him $14.544 million). In response, he infamously chose to sit out the entire 2018 season rather than play another year for what he perceived to be less than his true financial worth.

In an ironic postscript, Bell just signed a four-year $52.5 million contract with the New York Jets. Those good with maths will note that that works out to be about $13.125 million per year – over $1.3 million LESS than the money he gave up by refusing to play for the Steelers in 2018.

The Le’Veon Bell situation is a demonstration of what can happen when franchises misuse (in the eyes of the players) the essence of the franchise tag. It is designed to allow negotiation between teams and players, not allow teams to retain their stars at basement value.

By the time the Patriots had to make a firm decision about Flowers’ future (the deadline for franchise tagging was March 5), four other teams had already placed the franchise tag on edge rushers of equal or higher calibre. Kansas City with Dee Ford; Dallas with Demarcus Lawrence; Houston with Jadeveon Clowney; and Seattle with Frank Clark.

With those players off the board as potential targets for other teams, Flowers would have become (arguably) the best available free agent at his position. This meant his value in the open market was, in theory, somewhere close to $16 million per year.

Under the conditions attached to franchise-tagged salaries, the Patriots would have been required to pay Flowers around $17.1 million – notably more than his market value. Flowers is good, but to the Patriots he clearly wasn’t worth a contract which valued him as one of the top 3 players in his position.

The Patriots (notoriously) detest signing players for anything more than they’re worth at the best of times. They last used the franchise tag in 2015 on kicker Stephen Gostkowski. With kickers (as there is generally quite a small number of them in the league), franchise tagging costs roughly the same as what a half-decent player would fetch on the open market. Gostkowski, for example, played in 2015 under the franchise tag on a contract worth $4.59 million, and then was subsequently re-signed by the Patriots to a 4 year $17.2 million extension (working out to be $4.3 million per year).

The key to franchise tagging is the balance between the attitude of the franchise and the attitude of the market. The market dictated that Flowers was to be paid like a top-5 positional player in the league. In some situations, a team would feel (some would say justifiably) that paying slightly over the market value for a player on a one-year contract with the guarantee of keeping him for that year is worth the investment.

Not for the Patriots. They only have $24 million in cap space, and, as such, decided it was more worth their money to trade for Eagles’ edge rusher, Michael Bennett. Bennett will cost just $6.2 million in 2019, with a projected output of almost as much as Flowers, but at over half the cost.

There’s a reason they’re the most successful organisation in professional sports.

We hope this article allows you to converse with that arrogant, die-hard Pats fan in your life without feeling quite as overwhelmed as usual.

We’ll have an in-depth look at “guaranteed money”.

When you look at a player’s contract, why are there two vastly different numbers? Are the Atlanta Falcons actually paying Matt Ryan $150 million over five years, or is the actual figure closer to $100 million?

SportsTips covers all the latest betting, odds, picks & predictions news when it comes to major American sports like NFL, NBA, MLB & NHL. If you want to stay up to date with the latest information, SportsTips has you covered!