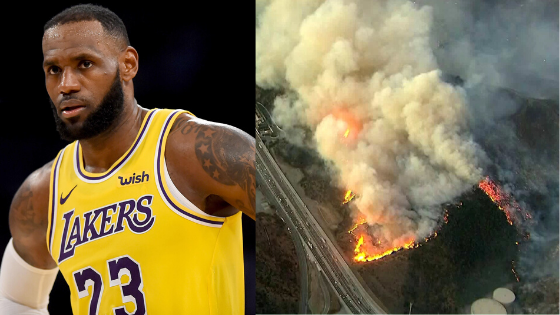 Lakers superstar LeBron James was forced to evacuate his L.A area home early Monday morning, as a fire that blew up in Southern California grew to more than 70 acres in size.

Just before 4AM PT, James tweeted that he was trying to find rooms for his family after “emergency evacuat[ing]” his house.

The Lakers beat the Charlotte Hornets 120-101 at Staples Center on Sunday night; James finishing with 20 points on 7-for-14 shooting, six rebounds and 12 assists in 35 minutes.

The LA fire department sent a warning out early on Monday morning that a fire had broken out near the Getty Museum and was moving west. A mandatory evacuation order was sent out encompassing Mandeville Canyon, Mountain Gate and parts of Brentwood, and later the order was expanded further west as well.

As of mid-morning the fire was burning to the north and the west of the Getty Museum, also forcing the evacuation of former California governor Arnold Schwarzenegger.

The cause of the fire is not yet known.

SportsTips covers all the latest betting, odds, picks & predictions news when it comes to major American sports like NFL, NBA, MLB & NHL. If you want to stay up to date with the latest information, SportsTips has you covered!